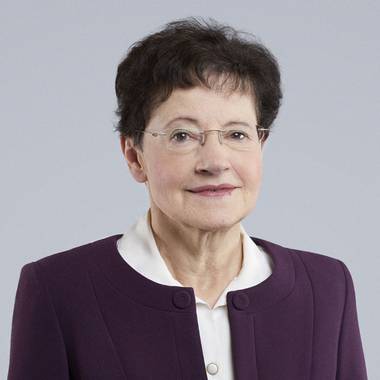 The 4th annual "Nicholas Kylafis" Distinguished Lecture was given for 2022 by Professor Françoise Combes, Chair of Galaxies and Cosmology at the Collège de France and distinguished astrophysicist at Paris Observatory, France.

Professor Combes is internationally recognized for her seminal discoveries in theoretical astrophysics and cosmology, as well as, the mechanisms associated with galaxy evolution and dynamics, the creation of supermassive black holes in galactic nuclei, and the properties of dark matter. She is one of the most prolific astrophysicists having published over 600 papers in peer-reviewed journals, which have received over 41,000 citations (h-index=102). Professor Combes has also authored several books and she is offering her time in various administrative positions and scientific committees in France and in international organizations and astrophysics journals. In addition, she has received a number of highly prestigious awards including:

She is also a member of several prestigious academies, such as the French Academy of Sciences, Academia Europeae, etc.

Professor Combes' lecture, which followed the public ceremony, was entitled "When black holes affect galaxies" and took place on Thursday 6 October 2022 at 14.00 at the Central Amphitheatre of the Foundation for Research and Technology-Hellas (FORTH), with simultaneous webcast.

The “Nick Kylafis Lectureship” was established by the Foundation for Research and Technology - Hellas in 2019 in order to honor Nick Kylafis, Professor Emeritus at the Dept. of Physics of the Univ. of Crete, on the occasion of his 70th birthday, for his 35 years of scientific contributions and leadership towards the founding and continuous improvement of the astrophysics group at the University of Crete and FORTH. This lifelong commitment has been instrumental in the international recognition of the research activities of the Crete astrophysics group, which led to the creation of the Institute of Astrophysics at FORTH in 2018. Under the auspices of the Lectureship, one distinguished theoretical astrophysicist is invited annually at FORTH for a brief visit.

The Institute of Astrophysics anticipates that establishing the "N. Kylafis Lecture" will attract distinguished Astrophysicists to Crete, who will inspire with their presence the younger generations of scientists trained at FORTH and the University of Crete, and communicate to the wider scientific community of Greece the latest achievements in the rapidly evolving field of Theoretical Astrophysics.