Blazars are some of the brightest objects in the sky. They consist of a supermassive black hole feeding off material swirling around it in a disk, which can create two powerful jets perpendicular to the disk on each side. A blazar is especially bright because one of its powerful jets of high-speed particles points straight at Earth. For decades, scientists have wondered: “How do particles in these jets get accelerated to such high energies?”

NASA’s Imaging X-Ray Polarimetry Explorer, or IXPE, has helped astronomers get closer to an answer. A new study in the journal Nature, authored by a large international collaboration, including a very significant contribution from current and past members of the Institute of Astrophysics -FORTH and the University of Crete, as well as data from the Skinakas Observatory, finds that the best explanation for the particle acceleration is a shock wave within the jet.

“This is a 40-year-old mystery that we’ve solved,” said Yannis Liodakis, lead author of the study and astronomer at FINCA, the Finnish Centre for Astronomy with ESO. “We finally had all of the pieces of the puzzle, and the picture they made was clear.” Liodakis, a native of Crete, graduated with a PhD from the University of Crete in 2017, and he has received both national and international awards for his work at the Skinakas Observatory and abroad, including the Young Researcher Award by the University of Crete, The Hellenic Astronomical Society Best PhD thesis award, a Gruber fellowship from the International Astronomical Union, and, most recently, the Best Young Cretan Researcher Award by the Region of Crete for his involvement with IXPE.

Launched Dec. 9, 2021, the Earth-orbiting IXPE satellite, a collaboration between NASA and the Italian Space Agency, provides a special kind of data that has never been accessible from space before. This new data includes the measurement of X-ray light’s polarization, meaning IXPE detects the average direction and intensity of the electric field of light waves that make up X-rays. Information about the electric field orientation in X-ray light, and the extent of polarization, is not accessible to telescopes on Earth because the atmosphere absorbs X-rays from space.

The new study used IXPE to point at Markarian 501, a blazar in the constellation Hercules. This active black hole system sits at the center of a large elliptical galaxy.

IXPE watched Markarian 501 for three days in early March of 2022, and then again two weeks later. During these observations, astronomers used other telescopes in space and on the ground to gather information about the blazar in a wide range of wavelengths of light including radio, optical, and X-ray. While other studies have looked at the polarization of lower-energy light from blazars in the past, this was the first time scientists could get this perspective on a blazar’s X-rays, which are emitted closer to the source of particle acceleration.

“This exciting project was expertly coordinated by Yannis Liodakis, who kept us observers at the various facilities around the world up-to-date to manage near real-time follow-up of the Xray data collection. From the Caltech side, the WIRC+pol polarimeter at Palomar provided NIR data on the source” said co-author Gina Panopoulou, who was a postdoctoral fellow at Caltech at the time of the observations, and is now a Professor at Chalmers University in Sweden. Panopoulou is and another celebrated University of Crete and Skinakas Observatory PhD graduate – with awards including the Young Researcher Award of the University of Crete, the International Astronomical Union Best Thesis Award, and a Hubble Fellowship from NASA.

The radio observations of Mrk 501 were led by Carolina Casadio, Staff Researcher at the Institute of Astrophysics – FORTH, and holder of a prestigious ERC starting grant. "It took a lot of effort to coordinate these many telescopes across Earth and Space, but the results were really rewarding! At radio frequencies, data were taken from the POLAMI project, the only systematic project for 3 & 1mm full-Stokes polarimetry of blazars" Casadio said.

Archival optopolarimetric data from the RoboPol instrument, operating since 2013 at the Skinakas Observatory, was used to understand how the current polarization of Mrk 501 relates to its historical behavior.

After comparing their information with theoretical models, the international team of astronomers realized that the data most closely matched a scenario in which a shock wave accelerates the jet particles. A shock wave is generated when something moves faster than the speed of sound of the surrounding material, such as when a supersonic jet flies by in our Earth’s atmosphere.

As particles travel outward, they emit X-rays first because they are extremely energetic. Moving farther outward, through the turbulent region farther from the location of the shock, they start to lose energy, which causes them to emit less-energetic light like optical and then radio waves. This is analogous to how the flow of water becomes more turbulent after it encounters a waterfall – but here, magnetic fields create this turbulence.

Scientists will continue observing the Markarian 501 blazar to see if the polarization changes over time. IXPE will also investigate a broader collection of blazars during its two-year prime mission, exploring more longstanding mysteries about the universe. 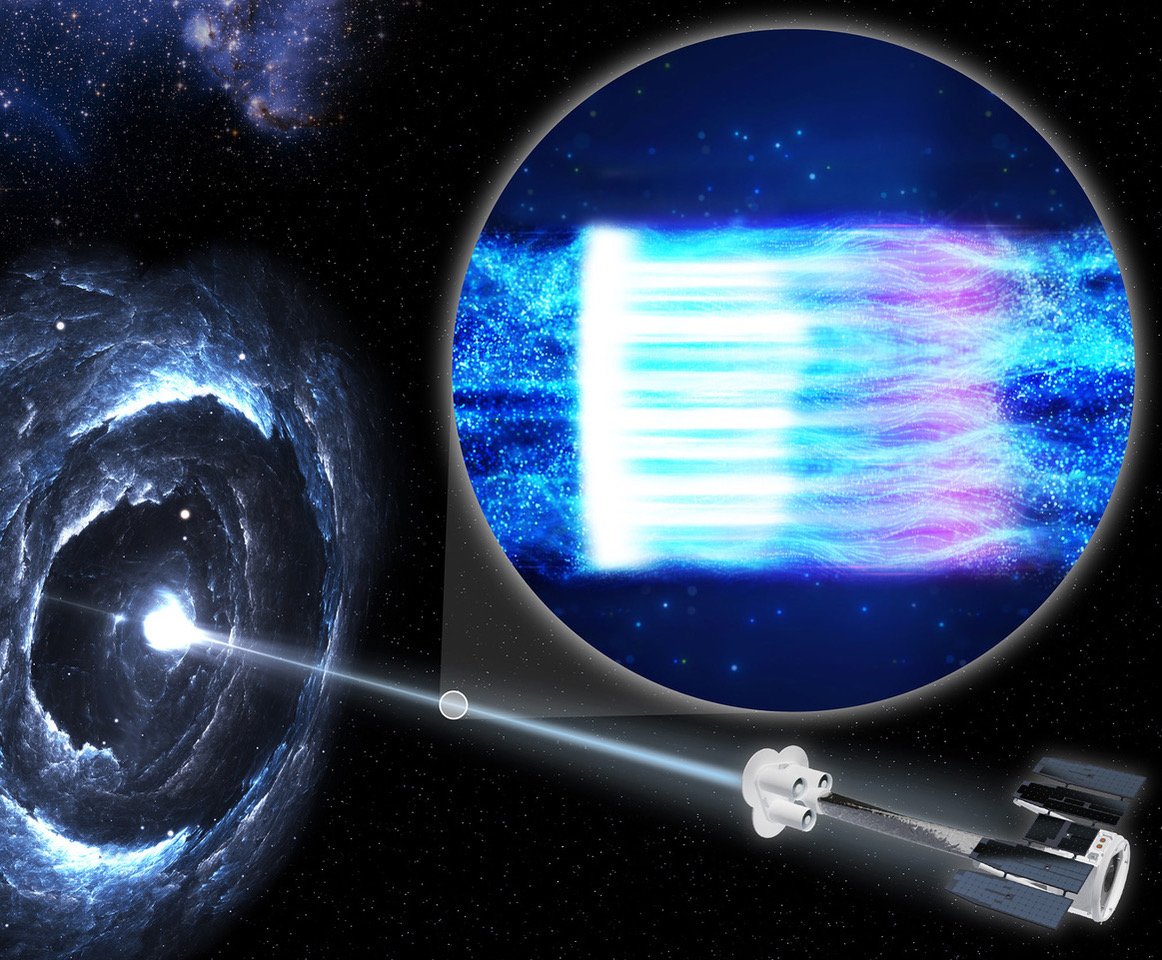 This illustration shows the IXPE spacecraft, at right, observing blazar Markarian 501, at left. A blazar is a black hole surrounded by a disk of gas and dust with a bright jet of high-energy particles pointed toward Earth. The inset illustration shows high-energy particles in the jet (blue). When the particles hit the shock wave, depicted as a white bar, the particles become energized and emit X-rays as they accelerate. Moving away from the shock, they emit lower-energy light: first visible, then infrared, and radio waves. Farther from the shock, the magnetic field lines are more chaotic, causing more turbulence in the particle stream